We need to install a cookie to continue. This message is displayed only once.

The first "monuments" that we're going to pay attention to are the petroglyphs of Tourón.

The richness and variety of motifs represented in "Outeiro das Sombriñas" are one of the best examples of our rock art.

As in other Galician municipalities, the City Council of Ponte Caldelas stands out from the point of view monumental buildings of a religious nature.

So we can mention the Romanesque church of Tourón, late twelfth century this art preserves the façade and chancel arch. On a side facade there is a shield of Pazos de Proben.

The parish church of Santa Eulalia de Ponte Caldelas stands out for its stone altarpiece by the teacher Manuel Gonzalez, author of the source is in the "Plazuela del Obispo" in the center of the town and Calvary Barbudo.

In addition, they also highlight the churches of A Insua, open to the Via Crucis valley with a stone around the court and the church of Xustáns (whole church and cemetery with interesting outo cruise).

- Chapel of the Sacred Heart of CASTELINO Xesús. From here you can see a wide panorama that even reaches the estuary of Pontevedra. The climb to this mountain is via crucis following a stone, and there is a legend about a horse tread the Apostle James in a nearby stone.

- Chapel of San Vicente de Parada. Located in an extraordinary framework for its natural beauty and proximity to a river. It has remains of an anthropomorphic tomb and every year UHA traditional festival is held in his honor and brings a large number of devotees.

- Chapel of Santa Comba de Rebordelo. In another nice spot and famous for the massive procession held in his honor

- Chapel of Cristo Rei in Xustáns. From where an extraordinary panorama can be seen, there not far from the petroglyphs quadrupeds.

The monumental wealth of this town is completed with numerous cruises and Wayside Shrine without forgetting several manors among which the manor of Pombal in Tourón, founded in 1688 by Don Pedro de Pazos Proben, and a manor house which also Tourón It corresponds to the former Casa da Inquisition, both now privately owned. 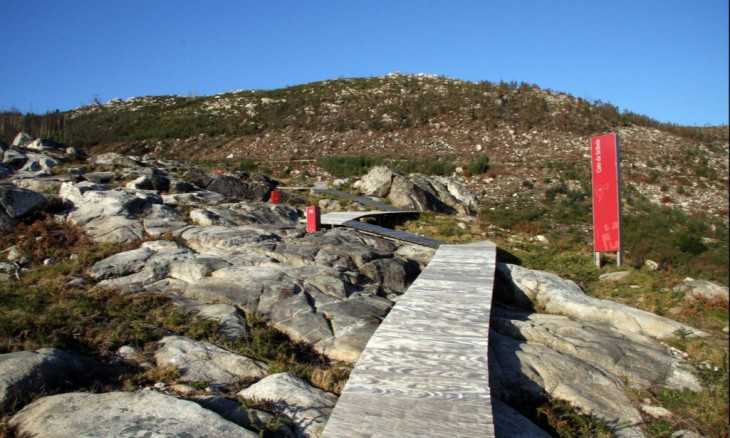